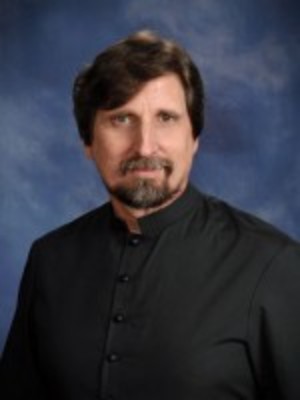 Deacon Lawrence Klimecki is an internationally acclaimed artist, designer, and writer, spreading the Gospel message through words and pictures that touch the hearts and minds of modern Catholics while remaining deeply rooted in Catholic tradition.

Since his ordination in 2008 Deacon Lawrence has used his background in art and design to encourage people to use their gifts to build the Kingdom of God, speaking to the artist that lies buried deep within each one of us. Through stories that are more like modern day parables, he connects the ancient teachings of Christ with the realities of the modern world, encouraging his listeners to strive to make their entire lives a work of art dedicated to God.

“I am passionate about helping people understand the gifts that God has given to them are for them to use in His service, building up the Kingdom. This particularly applies to artists and those blessed with creativity, which is to say, all of us. I speak on those areas where art intersects faith.”

He established The Catholic Artist’s Guild to give an online presence to the many visual artists struggling to have their work seen by a larger audience and is a regular contributor to Smallpax, The Catholic Illustrator’s Guild. His work was featured in the first national tour sponsored by the Foundation for Sacred Art and his clients include Paulist Press, LTP (Liturgy Training Publications), and EWTN.

Past talks have included topics such as “Art and Ecumenism,” “The Icon, its History and Meaning,” “The Development of Christian Art,” and “Liturgical Art in the Modern World.”

Deacon Lawrence currently resides in the Diocese of Sacramento, serving God by serving His people. He is the Founder and Creative Director of Gryphon Rampant, a firm specializing in liturgical art, design, and illustration. He is married to his high school sweetheart, AnNita and they have one son.

Most Sundays, Deacon Lawrence is at the 10:30 a.m. Mass.  Come say howdy to him after Mass!

Humility and the Garbageman

"If we would be blessed (happy), then it is for us to follow Christ in His humility."

Shining Light Into The Dark Places

“I am a fragment of a mirror ... I can reflect light into the dark places of this world" -Alexander Papaderous ... END_OF_DOCUMENT_TOKEN_TO_BE_REPLACED

The Work of the Christian

"For the Christian, there is only one task to accomplish but an infinite number of ways to do so." ... END_OF_DOCUMENT_TOKEN_TO_BE_REPLACED

We'll automatically email you the full text of his bulletin column each week when it becomes available.